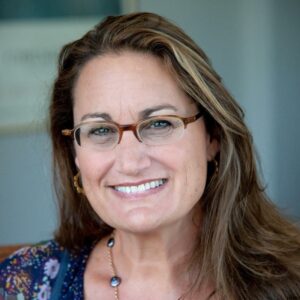 Karen Sloe Goodman is a trustee of the Silver Sun Foundation, and the Founding Director of the Silver Sun Residence. She has worked as an assistant art director on feature films, has produced, directed and edited documentary shorts, and holds an MA in Cinema Studies and an MFA in Film Production from NYU’s Tisch School of the Arts. From 2008 – 2022, Karen worked at the Jacob Burns Film Center as a film curator on annual series including Focus on Nature, Westchester Jewish Film Festival, and Sounds of Summer Music Documentaries.  As adjunct faculty at the JBFC, she  developed and instructed adult film education classes, and served as curator and host for the JBFC Preview Club from 2020-2022. Since 2014, Karen has served on the advisory boards for WFUV 90.7 Public Radio and The Secret City.

Karen is also a practicing goldsmith and jewelry designer, and a proud member of the Shovel Ready String Band.